“Living in Iran is not a happy life,” says Arad Winwin, a professional bodybuilder and underwear model. (We’ve featured him before, in a spread featuring David Rest.)

“People are just trying to trying to survive day-to-day. People are denied every type of freedom, personal choice and chance to advance their lives.”

Talking to C+C, Winwin (who’s currently a “Trophy Boy” for Andrew Christian underwear) discusses fleeing the Iranian military when he was 22; a decision that meant leaving all his friends and family behind.

Related: David Rest Posing With Arad Winwin Is A Win/Win If We’ve Ever Seen One

“I knew I would not be able to have any type of life that would provide me happiness there,” he says.

He escaped through the snowy mountains between Iran and Turkey on foot, and was arrested and imprisoned in Turkey for six months for not having a passport.

“During this time, Turkey was getting ready to deport me back to Iran where I would have been hanged for being a military deserter,” he says.

Though he describes his time in the Turkish prison as “horrible,” it probably saved his life: Inside, he met other Iranians hoping to escape, who tipped him off about the United Nations Refugee Program.

After sending a message to his parents, they reached out to an attorney, who helped Arad get into the program.

“I was accepted into their refugee program because the U.N. knew that I would be killed if I was sent back to Iran.”

Arriving in Dallas, Texas with $300 to his name, Arad didn’t speak any English. He found a low-wage job at an elevator company that he’d have to bicycle to and from every day for three hours. From there, he began go-go dancing.

The U.N. makes refugees repay their airline tickets so I spent the next year trying to pay that off…but at least I was free and I appreciated that Americans have a basic respect for each other which doesn’t exist in Iran. The first night I worked ?dancing ?I made more money than? most people make ?working 4 months in Iran.

I had always wanted to model but that isn’t even a choice in Iran. Unless one follows the strict religious laws you will be arrested.

Asked if he has any words of support for other gay people in similar situations, he says:

For me freedom and happiness are contagious and I want to help spread hope to other LGBT people who must live in any oppressive environments whether it is a small town in the U.S, or with a family that isn’t accepting or in a country like Iran where people aren’t allowed even basic freedom.

He says he wants to ““help make Americans understand that most people from the Middle East are just like you and me…they want to live in peace and freedom and many good people need our assistance.” 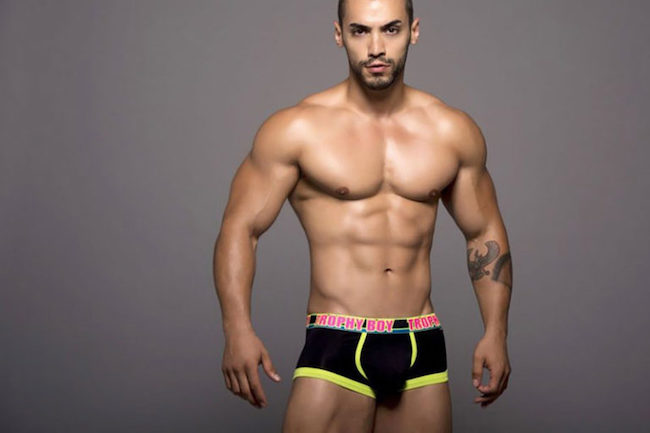